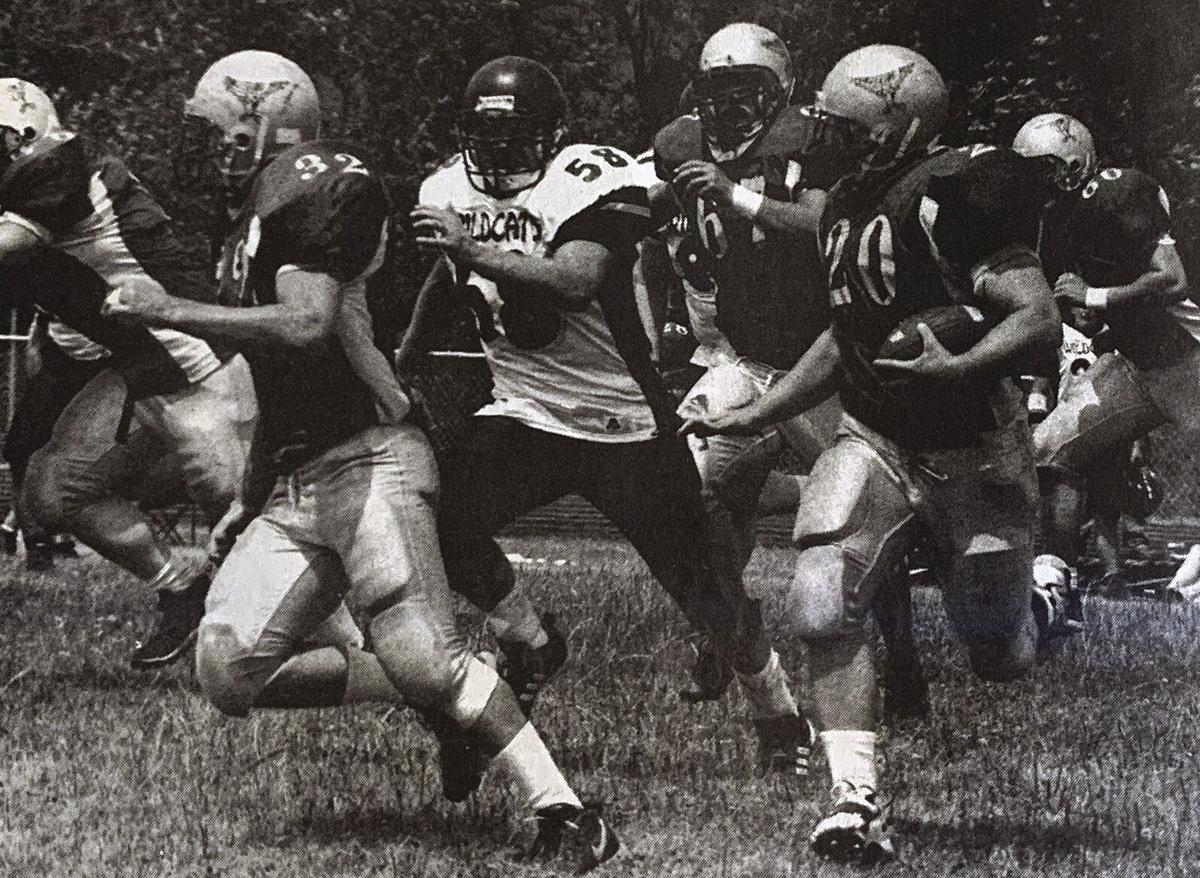 From the July 19, 2001 edition of the Cannon Falls Beacon. Running back Josh Hofstedt rushed for 115 yards against Lake Benton in the championship game. Also pictured is Justin Samuelson (#32) and Erik Prink trailing behind the play. 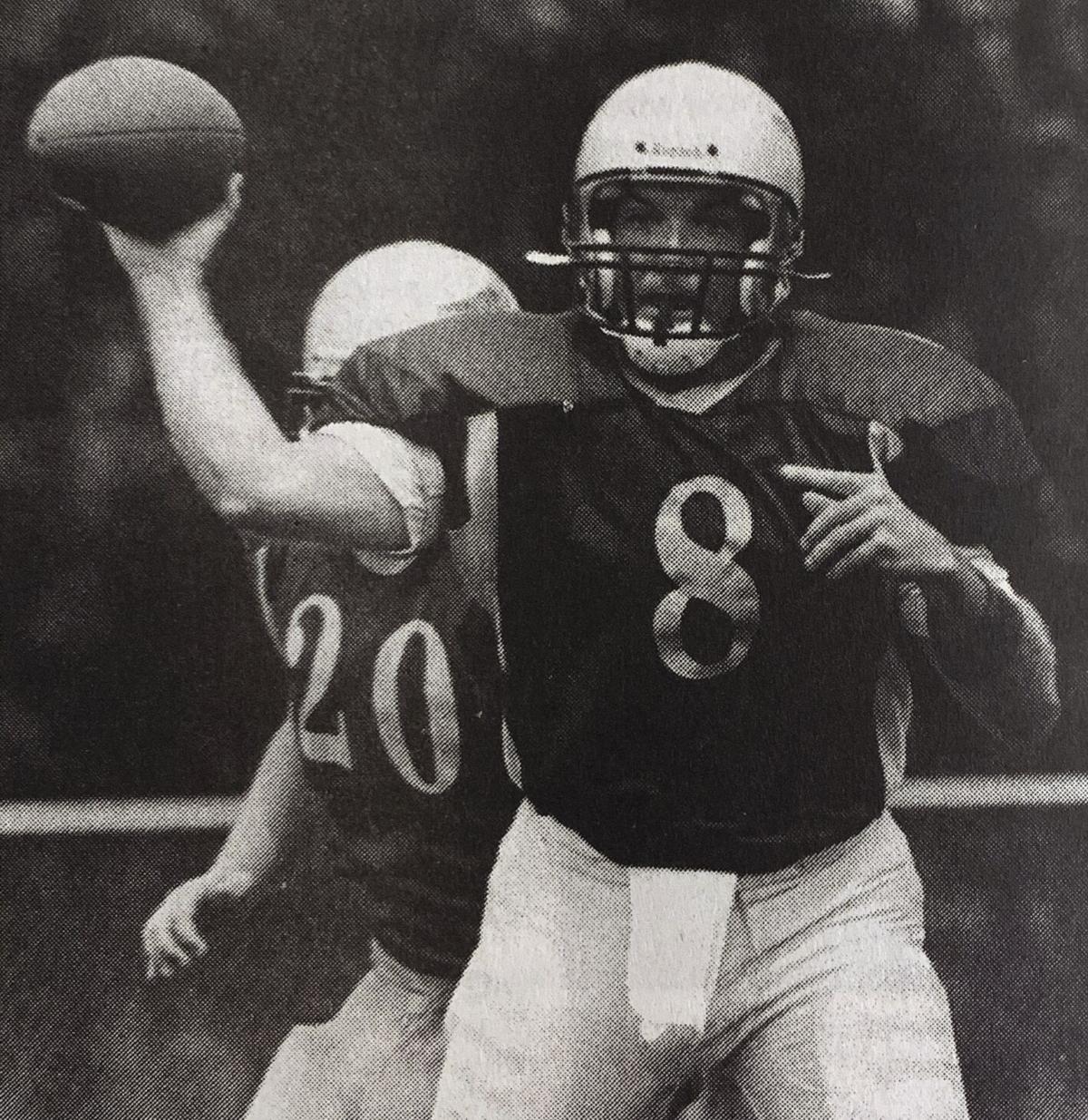 Kirk Affeldt, a former teacher at Cannon Falls Elementary School, was 12 of 25 passing for 180 yards and a touchdown in the win over Lake Benton.

The year was 2001. The Cannon Falls Thundering Herd was facing down the Lake Benton Wildcats for the sixth Southern Plains Football League Championship.

There were only minutes left on the clock in the fourth quarter when the Thundering Herd secured the ball and the game. With a score of 28-22, Cannon Falls won their first, and only SPFL Championship game.

“That was a very fun game,” said Josh Hofstedt, a player for the Thundering Herd in 2001. “We played against great competition. I think that was one of the best things about the league. We had some guys who played college football, some who never played college football, and we played a team that had some Vikings squad practice players on it. In the league there was a talent level [that ranged] from [not] playing high school football, to guys who played professionally.”

The Cannon Falls Thundering Herd actually started as the Northfield Thundering Herd when they joined the SPFL in 1999. The team moved to Cannon Falls in 2000, and saw more than 150 different people join during the five years they played. Not long after their win, the Thundering Herd, along with several other teams in the SPFL, disbanded in 2004 due to many players either getting older, or no longer having the free time to commit to the team.

“We should’ve won,” said current Buffalo Ridge Wildcats jack of all trades, Mike Tiedeman. In 2001 Tiedeman played for the Lake Benton Wildcats, and still remembers the end of the game vividly.

“It came down to us recovering a fumble within a minute or two of the game on their five yard line” Tiedeman said. “They got it back, it should’ve been our ball, but it’s one of those deals, and they held on to win the game. It was back and forth the whole game.”

Hofstedt credited their win to not only their team, but especially their coach at the time, Jarle Norstad.

“He was the high school coach and assistant high school coach for a lot of us, and then coached our team for us too,” Hofstedt said. “He was awesome. He put so much time in and did a great job. Jarle was an instrumental part of us winning.”

The team almost did not play in the 2001 season. Since the league is funded by participants, teams had to pay to enter, and the Thundering Herd was short about $800. The team was only able to enter after one of the players paid the full $800 on the promise that his teammates would pay him back, Hofstedt recalled.

Although the team disbanded, many of the former players still talk. Before the pandemic struck, they would occasionally meet up, and the topic always returned to their time in the SPFL.

“It’s a little stupid, but the few times we’ve gotten together we’ll talk about the good ‘ol days, that’s always something that comes up,” Hofstedt said.

Former Thundering Herd player Mike Samuelson agrees, and said he loved his time on the team and the opportunities it gave him to play with such a diverse group of guys.

The SPFL is still around and going strong, with 14 teams listed on their current website. Tiedeman, who has been a part of the league since it began in 1996, said this may be his last year as a part of the SPFL, but wanted people to know that it is the best league there is. Tiedeman’s sentiment matches Hofstedt’s.

“The one thing I think everyone that ever played would agree is they all have great memories of it,” Hofstedt said. “It was a really cool and fun thing and everybody that played liked it.”

What had a greater impact on the real estate market, the housing crash or COVID-19? Real estate agent Kathy Anderson responds