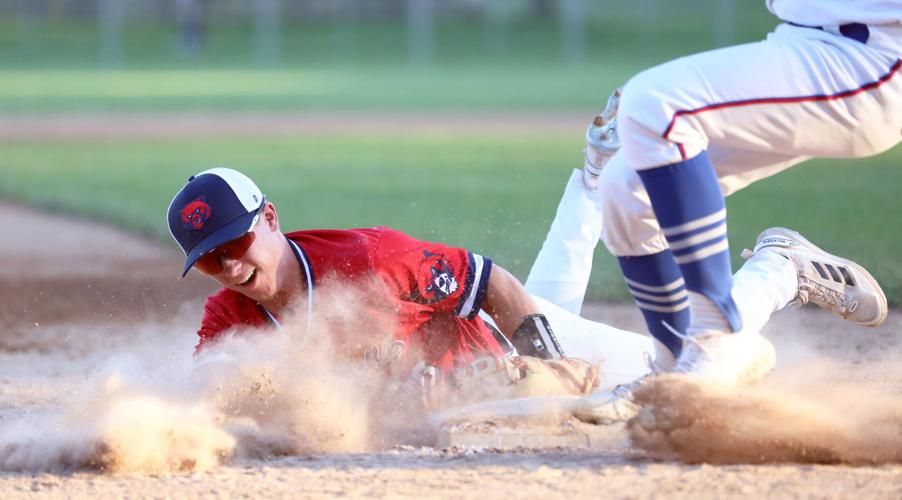 The Cannon Falls Bears lost to the Faribault Lakers 15-5 Wednesday night at John Burch Park in a non-league game. Here Beau Zimmerman dives back to third trying to get the double play after catching a line drive. Alec Hamilton / Cannon Falls Beacon

Beau Zimmerman smiles and points after hitting a solo home run over the scoreboard in the bottom of the sixth inning. Alec Hamilton / Cannon Falls Beacon 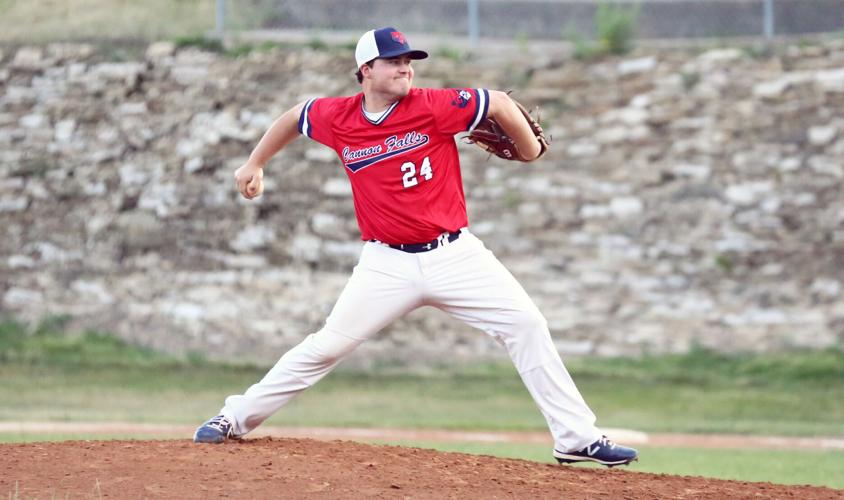 Cannon Falls' Quinton Lindow was the most effective of the Bears' four pitchers who took the mound in Wednesday's loss. Lindow threw three innings of relief and allowed two earned runs on four hits and a walk with two strikeouts. Alec Hamilton / Cannon Falls Beacon

The Cannon Falls Bears were one disaster inning away from a competitive game Wednesday night at John Burch Park against the Faribault Lakers. However, the Lakers scored nine runs in the top of the second inning and went on to beat the Bears 15-5 in eight innings.

Cannon Falls drops to .500 at 8-8 with the loss and will host the Prior Lake Mudcats on Friday. The Bears then travel to Hastings on Sunday to take on the Hawks and then are home against Miesville on Tuesday, June 28.

It is still relatively early in the season for Cannon Falls with 11 regular season games left before the playoffs. Manager Bubba Brintnall said Wednesday night after the game that overall he’s happy with where the Bears are at a little over halfway through the season.

“I like our team, we’ve been hitting the ball. We had a fun weekend of baseball in our tournament (the Josh Harrison Memorial Tournament) and if we had one more bounce go our way we probably win the tournament,” he said. “Games like this, it’s a non-league game and those are the games where we try and get as many opportunities for guys as we can. Basically get ourselves ready for the stretch run in July and build into the playoffs.”

With the 4th of July coming up, like many other teams Cannon Falls is dealing with players going or coming back from vacations, which can make for some turbulence in the game-to-game lineup. However, Brintnall said that has allowed some of the younger players like Riley Miller, Nolan Conzemius, Jayden Burr and Beau Zimmerman to get more playing time.

“Every year you get a new crop of guys, some second or third year guys who are taking that next step,” he said. “We definitely have a few this year that have taken advantage of some opportunities and some guys who are just getting their feet wet. Beau Zimmerman had a nice game at the plate today, hit the ball pretty well, we’ll see what the future holds for him but so far I’d say he’s off to a good start.”

Luke Sjoquist started on the mound for Cannon Falls while Egan Bonde got the nod for Faribault. The Bears took a 1-0 lead in the bottom of the first when Zeke Williams got a lead off single and later scored on an RBI-single by Conzemius.

However, disaster struck in the top of the second for the Bears when the Lakers sent 13 batters to the plate and scored nine runs on four hits, four walks, a hit batter, two errors and a passed ball. Cannon Falls stranded a runner in the bottom half and after two innings trailed 9-1.

Quinton Lindow relieved Sjoquist after those two innings and pitched three innings of relief. Faribault added two more runs in the top of the fifth to extend their lead to 11-1 but the Bears got one of those back in the bottom half when Derek Johnson singled with one out, went to second on a passed ball and score on an error by the Laker third baseman which allowed Williams to reach. Through four innings it was 11-2 and Quinton Lindow exited after the fifth as he was replaced by Riley Miller.

Zimmerman hit a solo home run over the scoreboard at John Burch Park in the bottom of the sixth to make it 11-3, but the Lakers scored three runs in the top of the seventh for a 14-3 lead, which put the 10-run rule into play.

In the bottom of the seventh, Cannon Falls extended the game by scoring two runs on an RBI-single by Carlton Lindow which scored Conzemius and an RBI-triple by Zimmerman after the Laker center fielder lost the ball and it went over his head. That scored Lindow and kept the Bears alive.

Johnson pitched the eighth for Cannon Falls and allowed a run for a 15-5 lead. The Bears could not rally in the bottom of the eighth and that was the final.

Zimmerman and Conzemius each had two hits for the Bears. Zimmerman had the solo home run and two RBIs in the game while Conzemius drove in a run, walked and scored. The Bears’ other RBI came from Carlton Lindow.

Cannon Falls used four pitchers in the loss. Sjoquist threw the first two innings and took the loss on nine runs given up (seven earned) on five hits and four walks with three strikeouts. Quinton Lindow pitched the third, fourth and fifth innings where he allowed two earned runs on four hits and a walk with a pair of punchouts.

Miller took the mound for the sixth and seventh innings and allowed three runs – two earned – on two hits and four walks with two strikeouts. Johnson pitched the eighth inning and allowed the one earned run on three hits with a strikeout.