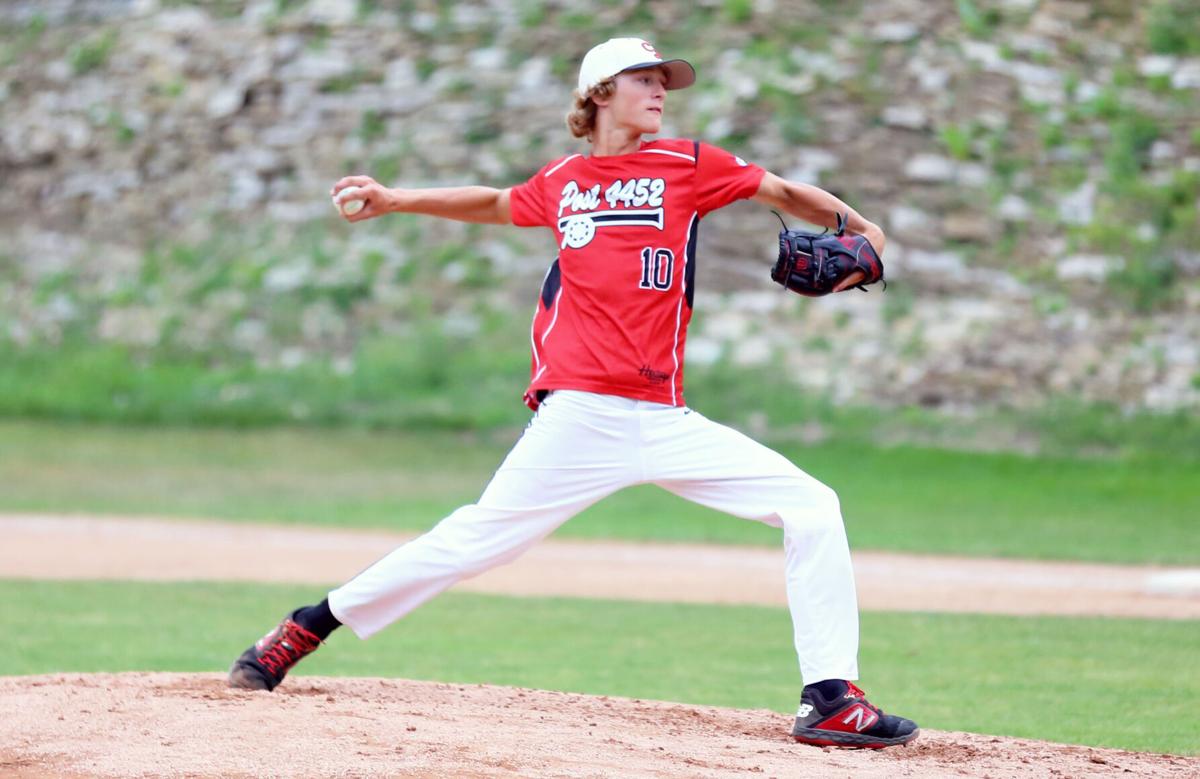 Ari Wells earned the win on the mound against Albert Lea as the Cannon Falls VFW 16U team rebounded from a loss to Owatonna during their division tournament. Alec Hamilton / Cannon Falls Beacon

Sam Shepersky went 3-for-4 at the plate with an RBI during Cannon Falls' win over Albert Lea during their division tournament. Here he hits during a home game against Red Wing. Alec Hamilton / Cannon Falls Beacon

Cannon Falls beat the Rochester Century Panthers 4-1 in their first game behind strong pitching performances from Jadan Winchell and Jack Meyers. Winchell went six innings to earn the win and gave up one unearned run on five hits and four walks with six strikeouts. Meyers pitched a scoreless seventh to get the save with two strikeouts. Five different Bombers had a hit in the game -- Meyers, Jon Banks, Elliot Nelson, Ari Wells and Winchell -- while Johnston, Winchell, Sam Shepersky and Brighton Lochner each had an RBI apiece.

Game two saw Cannon Falls edged out by Owatonna 8-7 in extra innings. The Bombers scored four runs in the top of the third and one in both the fourth and fifth to lead 6-0. However, Owatonna scored three in the bottom of the fifth and sixth to tie the game. Cannon Falls went ahead again in the top of the eighth, but the Huskies again responded to tie the game at 7-7. Owatonna then scored on an error in the bottom of the ninth for a walk-off win.

Banks pitched 5 ⅔ innings and gave up six earned runs on eight hits and two walks with one strikeout. Meyers threw two innings in relief and gave up two runs (unearned) on three hits with two strikeouts to get stuck with the loss. Wells got the final two outs. On offense, Wells led the team, going 3-for-3 at the plate with a run and two walks. Six different players had one RBI each.

The Bombers rebounded in game three with an 8-4 win over Albert Lea. The game was tied 3-3 heading into the fifth inning when the Tigers scored one run in the top of the fifth, but Cannon Falls responded with five in the bottom half of the inning to make it 8-4. Wells earned the win as he pitched six innings and gave up four earned runs on six hits and two walks with 10 strikeouts. Shepersky pitched the top of the seventh. Shepersky went 3-for-4 at the plate with an RBI while Meyers was 2-for-3 with two RBIs. Winchell and Jackson Ekstrom both scored two runs apiece.

It was a rematch with Owatonna in the final game that ended Cannon Falls’ season. The previous two matchups between the two teams were decided by two runs and one run respectively and this game was not much different as Owatonna went on to win 4-1. The Bombers struck first with a run in the top of the first, but the Huskies tied the game in the bottom of the second and then scored two runs in the third and another in the sixth. Shepersky went the distance (six innings) for Cannon Falls and gave up four runs -- two earned as the Bombers committed three errors -- on seven hits. He also had the team’s lone RBI as Cannon Falls managed just five hits, two of which came from Meyers.

Cannon Falls ends its season with a record of 12-11, many of which were double headers with 14 games in June and nine games over the final two weeks.