The Cannon Falls offense racked up almost 400 yards on the ground in the win over St. Charles behind some great play by the offensive line. Alec Hamilton / Cannon Falls Beacon 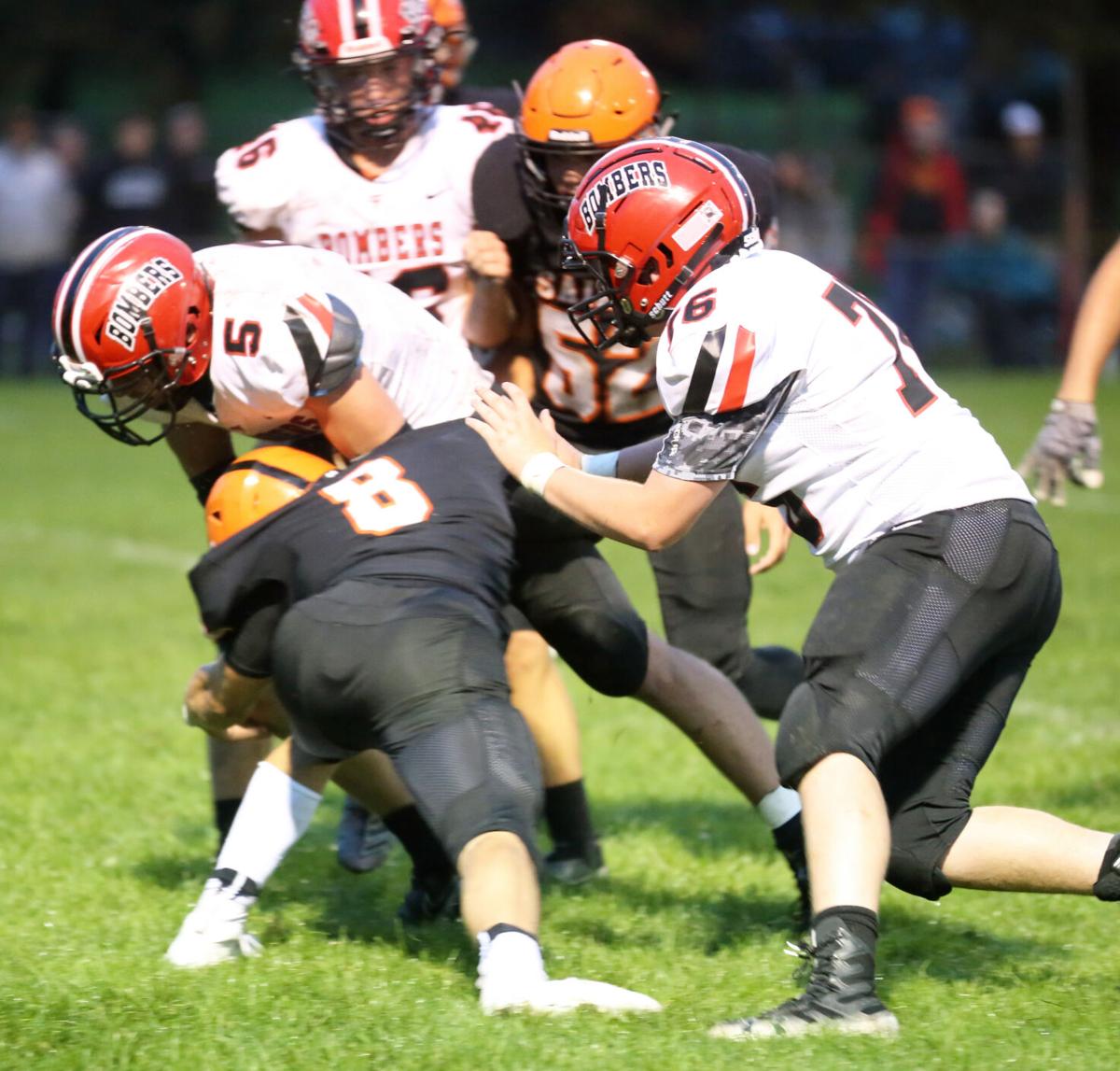 Senior Colton Loeschke runs through a tackler with some help from senior lineman Bailey Dwyer-Schacht before falling into the end zone for Cannon Falls first score of the night. Alec Hamilton / Cannon Falls Beacon 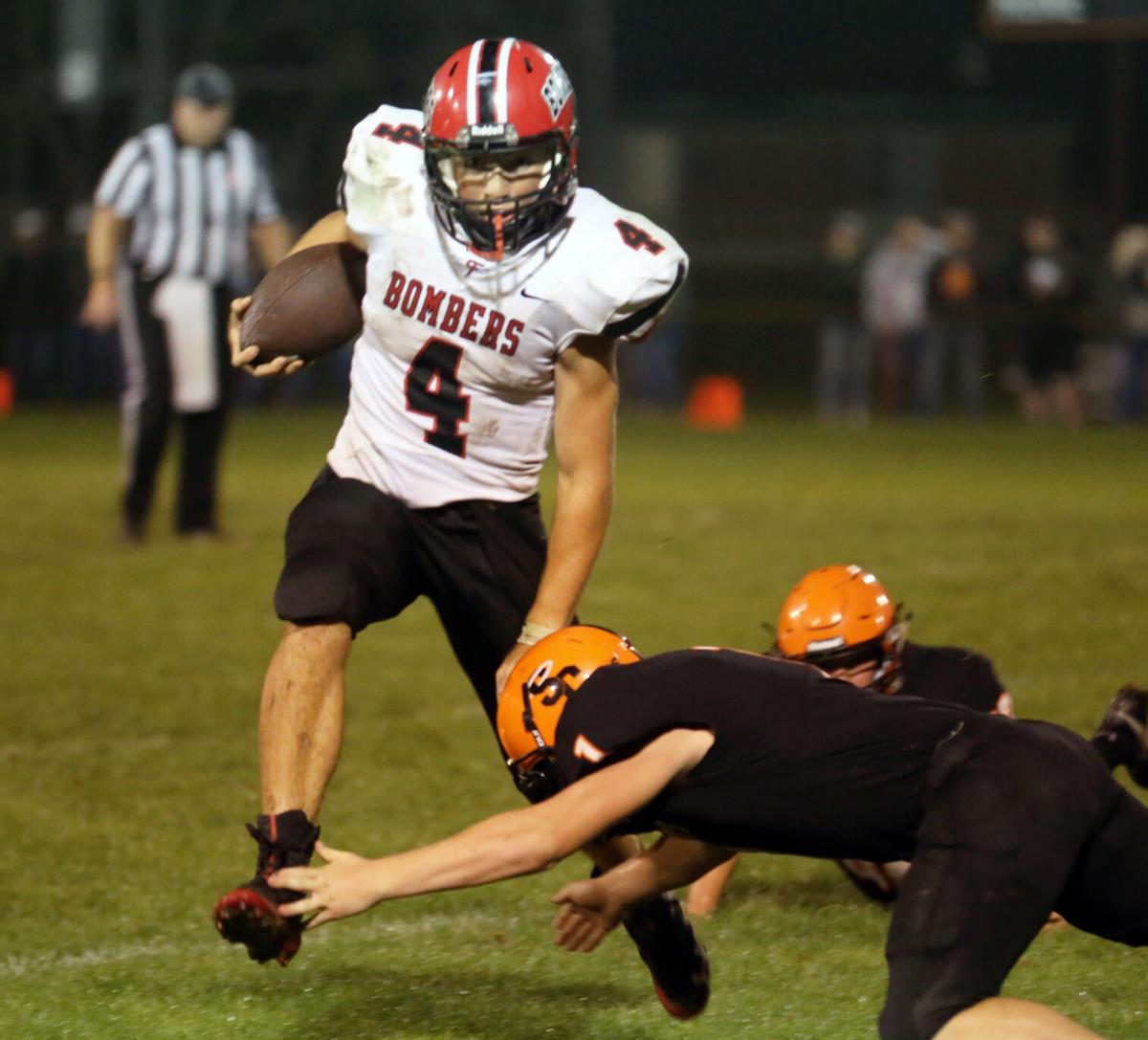 The Cannon Falls Bombers football team overcame some early adversity Friday night in St. Charles and went on to run over the Saints in a 21-6 win. The Saints struck first at the end of the first quarter but from then on it was all Cannon Falls, which racked up almost 400 yards on the ground. With the season-opening win, the Bombers start 2021 1-0 and will host Rochester Lourdes next Friday, Sept. 10, at John Burch Park.

Cannon Falls head coach Dan Meyers said after the game he liked how his team handled being down early.

“We started a little bit slow but that tends to happen on the first game of the year, guys just aren’t always ready for the full, live action, the first time really going after it,” he said. “We got down by a touchdown but I’m really happy with how our team responded though, we didn’t panic, we just kept playing our game, kept playing physical football. Ran the ball pretty well in the second half, played pretty good defense all night and came away with the win.”

The Bombers drove the length of the field after St. Charles scored but ended up turning the ball over on downs inside the red zone after the Saints stopped them on a fourth-and-1. The Bomber defense held firm and forced a punt, after which the offense put together another drive and senior running back Colton Loeschke scored from 8 yards out (extra point by senior Spencer Krinke was good) to give the Bombers a 7-6 lead with 2 minutes, 14 seconds left in the first half.

The score was still 7-6 at halftime but those two drives in the second quarter proved to be the turning point of the game. Meyers said that the improvement was just a matter of better execution after St. Charles threw the Cannon Falls offense a curveball.

“We were expecting a little different defensive front from these guys,” he explained. “They ran something different that they haven’t run against us in the past, so it took a little while to adjust to that. But they’re a good football team, they have a lot of good players, they’re gonna have a good season, so we were happy to come away with a win.”

Cannon Falls went ahead 15-6 to start the second half after driving 74 yards capped by a 5-yard touchdown run by senior running back Riley Keenan. Junior quarterback Colton Otto then hit senior tight end Beau Zimmerman in the back corner of the end zone for the two-point conversion with 8:04 left in the third quarter.

The third quarter ended with the Bombers on the move yet again and then senior Carson Hammel broke off a 38-yard touchdown run on the first play of the fourth. The extra point was botched so Cannon Falls led 21-6 just seconds into the fourth quarter.

St. Charles responded to that score to start the fourth quarter with probably their best drive since the one that gave them an initial lead. However, the time-consuming drive stalled in Bomber territory and they turned the ball over on downs at the Cannon Falls 28-yard-line with 7:39 left in the game. It was too much time off the clock for no points as the Saints played against the clock and the Bombers’ rushing attack. St. Charles got one more shot a couple minutes later after a Cannon Falls fumble, but once again turned the ball over on downs and Cannon Falls ran out the rest of the clock.

Meyers said there will be plenty to work on in the upcoming week, but that the win over St. Charles was good practice for next week’s game against Rochester Lourdes.

“The next opponent we have is Lourdes, and that’s a big rivalry for us, so we have to make sure we step up our game,” he said. “Luckily this was a team that runs option offense, and that’s what Lourdes runs, so it gave us some practice against that. But we’ll get into the film tomorrow and we’ll find plenty of stuff that we need to fix. And hanging onto the ball is a big thing too, we did fumble two or three times tonight, and that cost us so we need to continue to work on that.”

Defensively the Bombers held St. Charles to under 200 yards of total offense, 136 yards of which came on the ground. Loeschke and junior Kalahan Anderson led the team with eight total tackles each while Zimmerman was disruptive up front with three tackles for loss, including a sack.