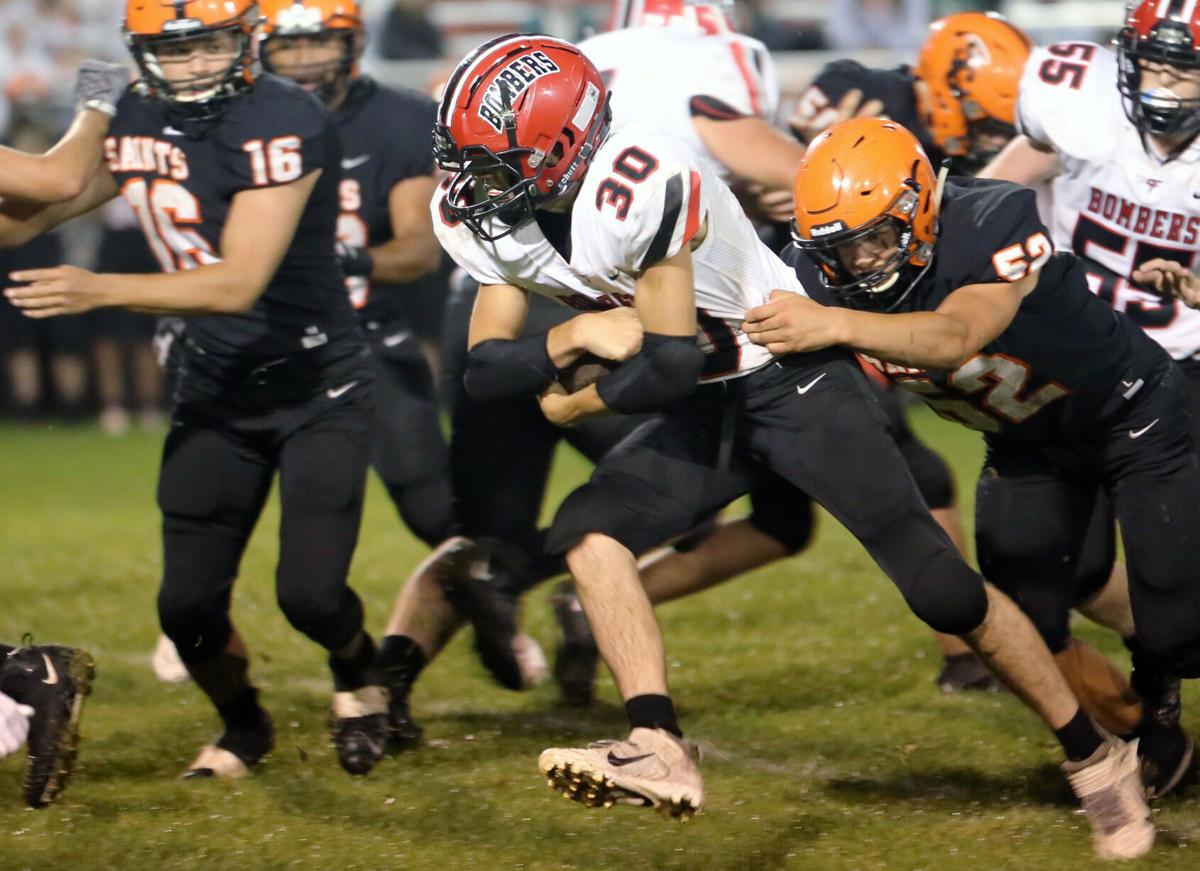 Junior Kalahan Anderson ran the ball 5 times for 52 yards and a touchdown, led the defense with 13 total tackles and had 3 tackles for loss against La Crescent-Hokah. Here he runs the ball against St. Charles. Alec Hamilton / Cannon Falls Beacon 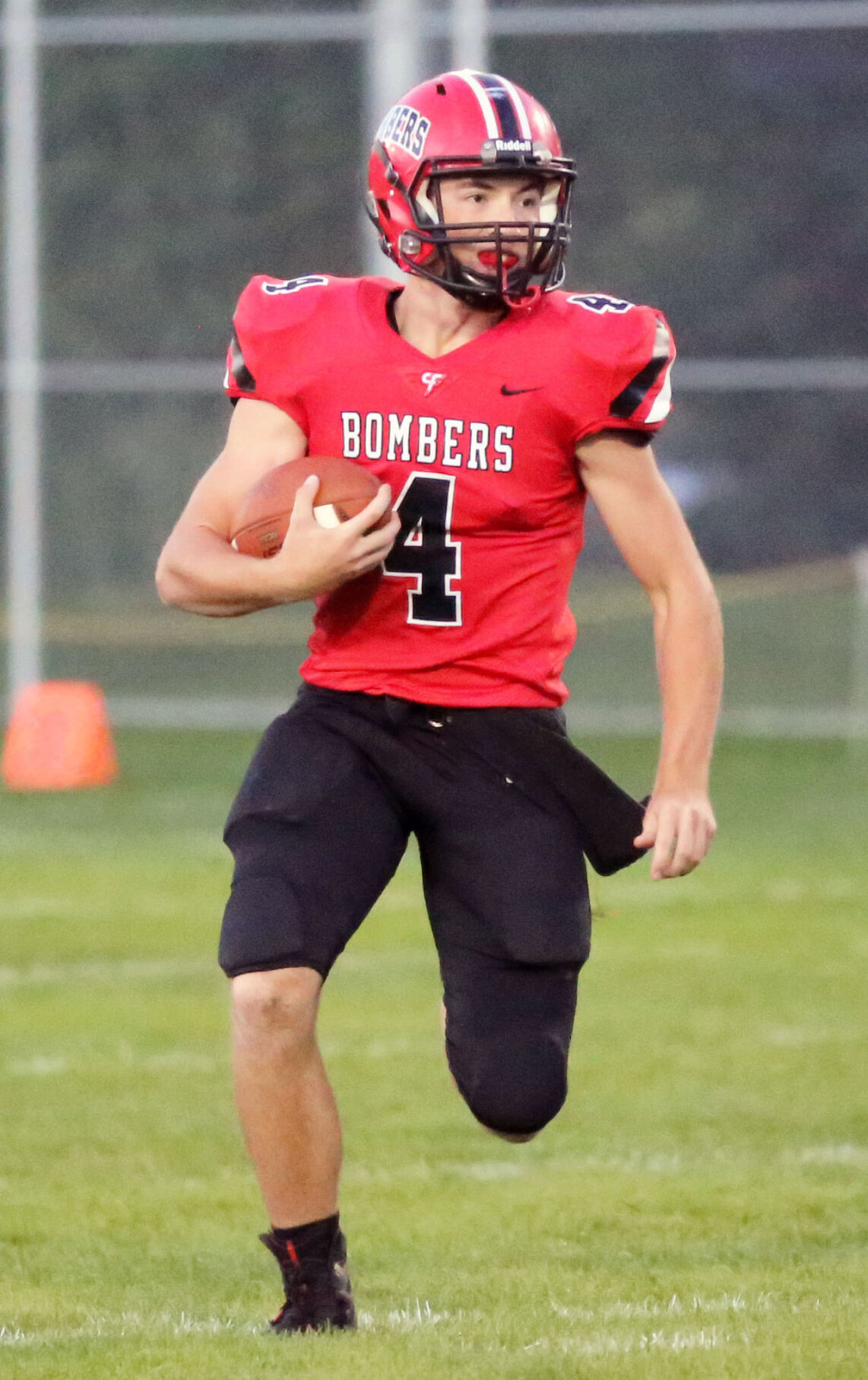 Junior quarterback Colton Otto threw for a touchdown and ran for another in the blowout win over La Crescent-Hokah on Friday. Alec Hamilton / Cannon Falls Beacon

The Cannon Falls Bombers football team got back on track Friday night on the road with a 54-12 rout of the La Crescent-Hokah Lancers. A week after struggling on run defense in the loss to Chatfield, the Bombers’ defense limited the Lancers to just 93 yards on the ground and less than 200 overall. Meanwhile, for the second time this fall the Cannon Falls rushing attack tallied over 500 yards.

Cannon Falls improves to 5-1 with the win and hosts the  5-1 Plainview-Elgin-Millville (PEM) Bulldogs on Friday, Oct. 15, at John Burch Park for Senior Night. The Bulldogs went into this past week ranked No. 9 in Class AAA. The Bombers then finish the regular season with a heavyweight showdown on the road against the top-team in Class AAA, the undefeated Lake City Tigers.

Cannon Falls got off to a fast start, scoring three times in the first 10 minutes for a 20-0 lead. Senior Carson Hammel had another huge game running the ball, which started when he broke a 62-yard touchdown run for the first score of the game just 1 minute, 13 seconds in. Just a few minutes later, senior Beau Zimmerman pulled in a 9-yard touchdown pass from junior quarterback Colton Otto for a 13-0 lead. Then toward the end of the first quarter, junior running back Logan Anderson-Rosebear scored from eight yards out and the Bombers led 20-0 after the extra point by senior Spencer Krinke.

La Crescent-Hokah got on the board with 10:40 left in the first half after a 36-yard touchdown run by Tony Haack. The extra point was no good and Cannon Falls’ lead was cut to 20-6. That would be the closest the game would be though, as the Bombers then scored another 20 straight points to put the game out of reach.

Otton answered on the Bombers’ next possession with a 38-yard touchdown run and Cannon Falls led 26-6 with 8:37 left in the first half. Towards the end of the half, Hammel broke another long touchdown run -- this time 74 yards -- and the Bombers led the Lancers 33-6 at halftime.

Midway through the third quarter, Rosebear scored his second touchdown of the game from 11 yards out to put Cannon Falls up 40-6 after the extra point by Krinke through three quarters.

The Lancer scored at the start of the fourth quarter on a 23-yard touchdown pass from Haack to Jameson Elsen to make it 40-12. The Cannon Falls reserves scored twice more in the fourth quarter -- a 4-yard touchdwon run by junior Davion Philips and a 19-yard scoring run from junior Kalahan Anderson -- for the 54-12 final.

“We got back on the winning track tonight with a decisive 54-12 win over LaCrescent,” said Cannon Falls head coach Dan Meyers after the game. “The run game was rolling, with 554 yards gained.”

Five different Bomber running backs ran for over 50 yards in the contest, led by Hammel who needed just 7 carries to rack up 177 yards rushing and 2 touchdowns. Rosebear also had 7 carries for 50 yards and two scores. Otto was Cannon Falls’ second-leading rusher with 7 attempts for 72 yards and a touchdown while senior Riley Keenan carried the ball 6 times for 71 yards. Anderson added 5 carries for 52 yards and his touchdown.

Otto was 1-for-3 passing, his only completion being the 9-yard touchdown to Zimmerman. On defense, Anderson and Zimmerman each had a sack apiece. Anderson led the team with 13 total tackles and 3 tackles for loss. Preston Schoenfelder had a fumble recovery.

The Bombers averaged over 10 yards per carry as they rushed 50 times for 553 yards and 7 touchdowns.